The Examiner sat down with Eddie and did an in-depth interview. 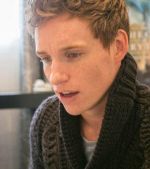 Ever since I first saw Eddie Redmayne in the TV miniseries “Pillars of the Earth” I’ve been a huge fan. Redmayne played the part of Jack and was mesmerizing. Since “Pillars,” Redmayne has carved out a diverse body of work. With each role he has become the actor to watch. His performances are in a word – sublime. You never get the sense that he is acting. He embodies each character with effortless perfection. In “The Theory of Everything” Redmayne is the essence of Stephen Hawking. From a gawky and nerdy young man to the fully stricken physicist with ALS, Redmayne is able, with just a slight rise of an eyebrow, to breath life and soul to his character.

In “The Theory of Everything” Redmayne brings the human aspect of Stephen Hawking to the forefront. Despite the progressive deterioration of Hawking’s health, despite his inability to walk or talk we see and feel who Hawking was, – and is, through Redmayne. With each facial nuance or sparkle in his eyes, Redmayne is Hawking. He brings humanity to his role as Hawking, it’s truly phenomenal. Together with Felicity Jones, who plays his wife Jane Hawking, they bring the remarkable love story to life. The movie is based on Jane Hawking’s book, “Traveling to Infinity: My Life with Stephen.” With an immediate and wonderful sense of humor Redmayne graciously sat down with me for this interview:

In preparation for this I read a lot about you and watched a bunch of interviews on YouTube. My favorite was your interview with Jonathan Ross on YouTube. Very funny.

Ah yes, where he asked if I have freckles on my testicles, yeah thanks Jonathan [laughs]. (To find out the answer to that, watch the interview.)

Looking back on your career so far, what were the pivotal moments for you as an actor?

My first was the production of “Oliver” when I was about 11. It was the first time I’d ever done something professional on stage. I was urchin #63, and I just loved it. The whole thing, the huge London Paladium Theater, dwarfed everything, and I just found it so exciting. So that was the first experience. And Jonathan Pryce was the actor playing Fagin. [Years later Redmayne would star with Pryce in “The Goat” but Pryce had no recollection.] About 12 years later my next big breakthrough was a play called “The Goat” by Edward Albee and Jonathan Pryce played my dad. That was my first time doing a stage play on the west-end stage. My opening line was, “You’re doing what, you’re fucking a goat?” I was 24; it was great [chuckles]. And then, [thinking] how interesting that these [pivotal moments] are all plays. And then a play called “Red” with Alfred Molina about [painter] Mark Rothko. [“Red”] was about everything I was interested in like art and commerce and it was in a theatre called the Donmar Warehouse [in London]. And then Tom Hooper casting me in “Les Miserables.”

I read off a quote by Redmayne’s costar from “Birdsong.” Clémence Poésy says, “Eddie is wonderful. He is one of the few actors who could play a character like Stephen in Birdsong, from a young man falling in love at 20 to a haunted man of 35 who has been through a war. When we filmed the scene where my character Isabelle and Stephen meet up years later, it was extraordinary. Eddie walked into the room and it was as if the war had come in with him, his eyes had the haunted look of someone who had been through something dreadful. It is an amazing performance because he does so much without word.”

What’s interesting is there is sort of a similarity in some ways to that movie and this in that we did not shoot chronologically. What was so complicated in “Birdsong” was playing the young man at 20, and then playing him after the war at 35 in the same day, or the other way around. And in “The Theory of Everything” it was similar jumping around the different physicality’s, all within the same day. So for me it was all about the prep early, so that when it came to playing with Felicity [Jones, his costar in “Theory”] you’re being freed. “Pillars of the Earth” was the same.

Are you interested in getting into directing or writing?

I would love one day to direct. I feel like writing is a big part of an actor’s, not job, but really working with writers is quite an important thing just having that dialogue as you begin to know a character backwards, working out what’s sound, what’s true. Certainly I’ve always been very lucky and in such admiration of writers. I did a play, “Red,” with John Logan, he’s a great screenwriter. Or Chris Shinn, amazing playwright. I love that relationship between writers and actors. Edward Albee, “The Goat” writer, amazing and inspirational. I’m pretty useless and doing it myself. I’m trying by osmosis, to learn as much as I can from all the directors I work with.

How do you get into character? You completely submerse yourself into each character.

I never went to drama school so I don’t have a process. Each job I tend to shift or change the process depending on the circumstances, depending on the character and [the] time to prepare. The most amazing thing about “The Theory of Everything” is James [Marsh, the director] allowed me 4 months. I worked with an amazing dance choreographer and amazing make-up designer, Jan Sewell. My instinct was everything would affect everything. I lost weight. What was complicated with this was Hawking does get substantially thinner in the story. But we could not shoot chronologically. That was a big question. James tried to make it to allow me to shoot chronologically and lose weight but economically they could not make that work. So what I did was lose about 15 pounds before we started filming. So early on, the collars would be tight, the make up would be healthy, and then gradually it was all about proportions. As I got I got frailer, the costumes got more oversized; the angles the camera was shooting. That was the complication on this film how you depicted the illness as it progressed.

Every nuance of your face, which was how isolated Redmayne’s performance of Hawking became, was amazing.

How has your family reacted to your journey as an actor?

They have been so supportive. They don’t come from this background. They have been staggeringly supportive even though all the odds have been it’s very difficult as an actor. All of this is true, to get work. I never let myself believe that this could be a career. So I left university having studied History of Art. Then I gave myself a few years to try doing this thing that I really cared about. I did not want to live in regret. I’ve been so lucky.

What are you reading right now?

Books that are on my night stand at the moment. A book called “I am Pilgrim,” “Love, Nina” which is a very funny book about a nanny of these kids, Wilmers-Frears kids, in the 1980s. My little brother gave me “The Count of Monte Cristo” and another friend gave me a book called “Middlesex.” And my favorite is the one I just read [as part of prep] called “Conundrum” by Jan Morris. This is the book for my next movie called, “The Danish Girl” where I’m playing a trans-woman. It’s a movie about Jan Morris and about her transition.

What television shows do you watch?

I’m so bad; I’m about 10 years behind. I have not caught up on [TV]. I just watched my friend Jamie Dornan on a series called “The Fall,” which is brilliant, also with Gillian Anderson. They just finished filming the second season. Hannah, my lady [his fiancé] has got me into “Homeland” which I love, and my favorite, favorite piece of television ever is “The West Wing.” I love it so much. I generally don’t get massively star stuck but were I to meet any of the cast of “The West Wing” like Bradley Whitford, Richard Schiff, Martin Sheen or Allison Janney, I would get tongue tied like when I met Stephen Hawking.

As a young kid definitely “Robinhood.” Now quite a few. “My Summer of Love” with Emily Blunt and Emily Press, “Blue Valentine” was an extraordinary film.

I do kind of watch to learn from my mistakes. I normally watch them a couple of times and then feel that’s as much as I can cope with really. And then never see it again.

Are you social media? Are you tech savvy?

I have a smartphone for when I’m here in the states. I’m actually a bit of an addict to getting information so in the UK I’ve gone off my smartphone to an old school battered Nokia. I follow my family on Instagram but I’m not on Instagram myself. I’m not on Twitter. I find it difficult enough to be present. I tried once to write a diary and I was so self-conscious. So with Twitter, everything I’d tweet I’d be really self-conscious. It’s difficult enough having time to be engaged in life that I would end up wasting mine and everyone else’s time.

You’ve portrayed a lot of real life people. Years from now, if someone were to portray you, who would you want that to be? (Based on actors of today)

[After much deliberation] Ben Whishaw, he’s amazing. Do you know whom I mean? He plays “Q” in Skyfall [James Bond], the young Q. He’s amazing. He would definitely not want to play me [but that’s who I would pick]. I think he’s a genius.

Throughout the interview Redymayne is genuine, funny and thoughtful. He has several other projects in the works including “The Danish Girl” and “Jupiter Ascending.” So keep an eye out on his infinitely rising star. And be sure to check out “The Theory of Everything” in theaters November 7, 2014.