Interview Magazine features Eddie on the cover of their new issue! Actress Jennifer Lawrence interviews our fabulous man and the two bond over the reality series “Real Housewives”. 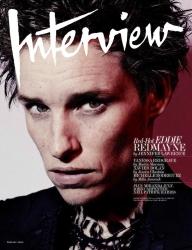 There’s an old saying, the kind you might find in the office of a high school guidance counselor, that goes something like, “Shoot for the moon, and even if you miss, you’ll end up among the stars.” Eddie Redmayne is an actor already on the rise, but with his performance as a young Stephen Hawking in search of the secrets of the universe in this past fall’s The Theory of Everything, he shot past the moon and may well end up with interstellar stardom. Or at least an Oscar.

Born in London in 1982 and educated at Eton and Trinity College, Cambridge, where he studied art history, Redmayne came up with some dynamic and swoon-worthy roles in lush period pieces such as Shekhar Kapur’s Elizabeth: The Golden Age (2007), Robert De Niro’s CIA saga The Good Shepherd, and the epic 2010 miniseries The Pillars of the Earth. But if Redmayne’s early work showed that he could be an engaging performer, his recent work (including Tom Hooper’s starry 2012 production of Les MisÃ©rables, in which the actor stormed the barricades as the romantic Marius) showed him to be as ambitious as he is talented. This month, Redmayne will again aim for the heavens, in the Wachowskis’ space opera Jupiter Ascending, donning some serious mascara in the process to play an extra-planetary villain.

Jennifer Lawrence, who knows a bit about sci-fi, met Redmayne years ago through director Oliver Stone. Fresh off her worldwide press tour for The Hunger Games: Mockingjay Part 1, the Oscar winner called Redmayne, who was in Turin, Italy, to talk about running on fear, Real Housewives addiction, fake falls, and bad salmon.

JENNIFER LAWRENCE: I watched The Theory of Everything with my jaw dropped the entire time. You were so fantastic! I didn’t even know some of that was possible.

EDDIE REDMAYNE: Well, thank you. When I was cast, my mate Charlie Cox, who plays Jonathan in the film, said, “If you get the opportunity to play Stephen Hawking, you have no option but to give it your everything. You have to give 8,000 percent.”

LAWRENCE: Did that scare you?

REDMAYNE: Oh, it was petrifying!

LAWRENCE: That would scare the shit out of me.

REDMAYNE: You do that thing of trying to chase down the job, sounding incredibly confident because you never think you’ll get it. And then you get offered the job, and you have a moment of euphoria, and then you basically want to be sick for the first year.

LAWRENCE: I don’t know if you get this, but I get embarrassed really easily when I have to have big meltdown scenes. Do you get self-conscious?

REDMAYNE: Are you kidding me? I’m just one gigantic ball of rancid fear and self-consciousness. I’m entirely fueled by fear, so the fact that I knew it could be a catastrophic disaster made me unable to sleep, and made me work quite hard.

LAWRENCE: It looked like you lost a lot of weight.

REDMAYNE: I lost, like, 15 pounds at the beginning of the film. With the disease, Stephen did lose a lot of weight. But we couldn’t shoot chronologically, so we were having to jump between different time periods within the same day. Our extraordinary makeup artist, Jan [Sewell], and costume designer, Steven [Noble], did clever things like making the collars tight and my makeup look healthy in the morning, and then, if in the afternoon I was playing him older, they would mess with proportionsâthe collars would become bigger or they would use slightly oversized wheelchairs. But it was a real work in progress. Do you ever watch dailies?

LAWRENCE: No. Unless I keep getting the same note and I’m obviously not getting it, then I’ll watch it again on the monitor. But, oh my God, did you watch rushes of this?

REDMAYNE: We sort of had to, because we were jumping in and out of all these different time periods and trying to track the illness and the physical decline. I had an iPad with all the documentary footage of Stephen and then we had the dailies. I kept hoping that the two things were going to meet, but obviously they never did. [laughs]

LAWRENCE: Maybe watching dailies would make me better. Every time I’m at a premiere, all I’m doing is thinking, “Oh, you shouldn’t have said it like that!” Actually, it would probably just make me neurotic. What was your most helpful tool? Was it the Stephen documentaries?

LAWRENCE: I know! And I just came up with it, too.

REDMAYNE: I think you’ve got a sideline. Oprah beware. [both laugh] There was one documentary of Stephen and [ex-wife] Jane [Hawking] from the 1980s. It’s the only footage I could find of Stephen speaking, and he’s almost incomprehensible. The illness has really taken hold of his physicality. He can still move, but it was a very specific physicality. You could still see the mischief in him, the glint in his eye. I had these three images in my trailerâone was Einstein with his tongue out, another was James Dean, because Stephen is just effortlessly cool. He has this kind of shambolic confidence to him. And the last one was a joker in a pack of cards, a marionette with a puppet, because when you meet StephenâI describe it as a “Lord of Misrule” qualityâhe’s got a great sense of mischief. I worked with a dancer as well, an amazing woman called Alex Reynolds. My instinct was to try to learn the different stages of the physicality like a dance. Like learning steps, you never have a hold of itâI’m a shit dancer by the wayâbut once you know the steps, you can then play. So we went to these ALS [amyotrophic lateral sclerosis] clinics in London to become educated in the specifics of the disease. Then I’d go to a studio and Alex would film me walking with a dropped foot or something, and we would go and scrutinize it. It’s one of the things that you can’t see on your own. The other thing about ALS is that no one knows when it starts. You normally discover you’ve got it because you fall and go to the ER, and they’ll just bandage you up and send you home. It takes a really astute doctor to realize that the reason you fell was because your foot muscle has dropped. I take it that Stephen probably already had ALS from the outset of the film, so I tried to find the little details in his hands and stuff that Alex would just be rigorous with. And you know how, quite often, people don’t understand how actors work and so they treat us with kiddie gloves?