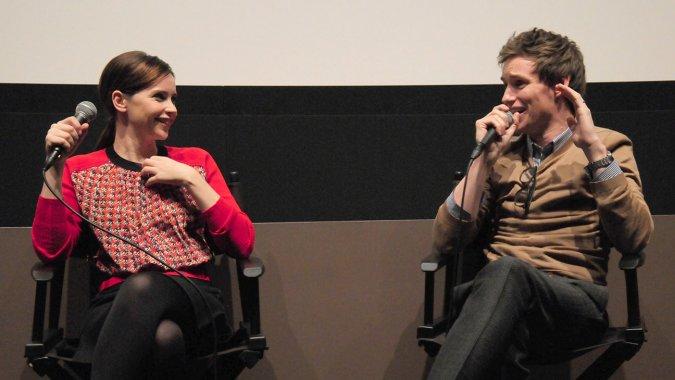 Eddie Redmayne and Felicity Jones cultivated their onscreen chemistry as Stephen Hawking and Jane Wilde in The Theory of Everything through good-natured verbal criticism.

“Eddie and I developed this method where we would give each other direction from behind the camera,” Jones explained.

“Felicity is being really polite,” Redmayne said, cutting in. “Actually what we’d do — you know that croquet scene? … As Stephen was trying to keep it together, I said to Felicity, ‘Will you scream some abuse at me from off-camera?’ Because we were old friends, she went for the jugular, and I was trying to keep it together. And what was absolutely hilarious is the poor producers and all the crew, here were these two actors on day two of a two-month schedule, they were like, ‘Oh my God, they hate each other!’ ”

“We would always look for the light,” Redmayne said of how he and Jones approached the difficult subject matter of Hawking and his now ex-wife’s relationship through his slow physical decline as a result of ALS. The film, which is directed by James Marsh and written by Anthony McCarten, is based on Jane’s book Travelling to Infinity: My Life With Stephen.

“The illness couldn’t be less important,” Redmayne said. “I wanted to make sure it was a film about love.”

In order to focus on the emotional core of the film, Redmayne had to be sure the physicality of Hawking’s movements as he progresses through the disease were natural to him. He worked with a dancer, Alex Reynolds, on contorting his body, and also spent four months with patients at an ALS clinic in London, along with Jones, being invited into homes and spending time with individuals at all stages of the disease’s course. He found in his observations that humor and levity were of the utmost importance.

“There’s a mischief to [Hawking] … and he plays with that,” Redmayne said.

Although no footage exists of Hawking before he began life in a wheelchair, Redmayne aimed to capture his essence. “I wanted to retain that glint in his eye that he had when he was young,” he said.

The filming was a sort of homecoming as well for the pair. Jones attended Oxford and Redmayne attended Cambridge, where much of the film is set and some of it was filmed.

“I remember I was so nervous,” Redmayne said of shooting at his alma mater, which he said brought on “flooding nostalgia.”

“It took like a day into filming or something, and my mom and dad sent me a text message about how amazingly lucky to think 10 years on, you’re back at Cambridge getting to play Stephen Hawking.”

Jones, meanwhile, said that her college experience was a bit different from the romantic, showy ball that Hawking and Wilde attend in the film.

“The balls were so much more debauched than that! By the end of them, everyone’s sort of rolling around on the grass,” Jones said.

Jones and Redmayne also recalled what it was like to meet Hawking and Wilde, which occurred just a few days before filming began.

“I was quite intimidated, but she was just incredibly open,” Jones said of meeting Wilde for the first time. “When you’re playing a real person, you’re just trying to build up trust, and in some ways, you’re trying to get their blessing. … A lot of it is you’re trying to pick up clues from someone. It didn’t feel right to go in and ask very personal questions initially. I was fascinated by the way she moved, and there were little idiosyncrasies in the way she held herself and all those little details.”

Jones also had some physical challenges in her role, revealing that she had to build strength to push Redmayne’s Hawking around the set.

“I had to go to the gym!” Jones exclaimed. “He may look very light, but in fact, he’s very heavy.”

Redmayne spent several hours with Hawking before filming began, and the two had another meeting after shooting was complete.

“I saw him just before he saw the film,” Redmayne said. ” ‘I’m really nervous, but I hope you enjoy the film. Let me know what you think.’ He took a wee while to type out his response. I literally was crying inside! And then he said in his iconic voice, ‘I will let you know what I think, good or otherwise.’ “