Welcome to Eddie Redmayne Web yoursource dedicated to the Academy Award winning actor Eddie Redmayne. Eddie is best known for his role as Newt Schmander in the “Fantastic Beasts” films. He has always starred in the movies “The Theory of Everything”, “Les MisÃ©rables”, “The Danish Girl” and “My Week with Marilyn”. We aim to provide you with all the latest news, information on Eddie’s career, photos, and much more. Thank you for visiting!

In an effort to thwart Grindelwald's plans of raising pure-blood wizards up to rule over all non-magical beings, Albus Dumbledore enlists his former student Newt Scamander, who agrees to help, unaware of the dangers that lie ahead. Lines are drawn as love and loyalty are tested, even among the truest friends and family, in an increasingly divided wizarding world.

Pilot Amelia Wren and scientist James Glaisher find themselves in an epic fight for survival while attempting to make discoveries in a hot air balloon.

Our Partners
Follow Us On Twitter
Follow @ERedmayneWeb
Stay up-to-date on the latest news and photos of Eddie and his career by following us on Twitter!
Our Friends
Random Quotes
Eddie’s Style
Recent Releases
Gif of the Moment

USA Today shared this great article about the filming of Early Man and Eddie portraying Dug. 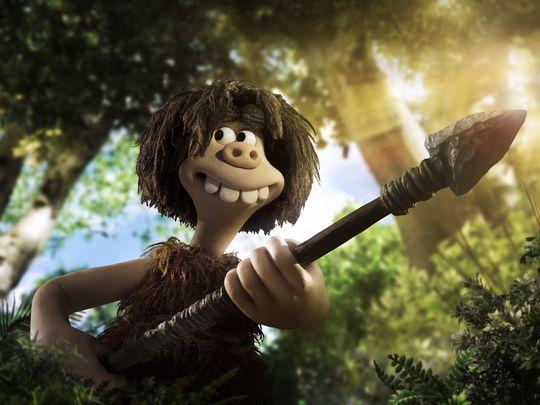 Eddie Redmayne is an Oscar winner with an exceptional knowledge of Fantastic Beastswizardry. But he’s well aware of his own acting limits.

So when director Nick Park, from the beloved British studio Aardman Animations, asked if he would voice the prehistoric Dug in Early Man (in theaters Feb. 16), Redmayne made a rare request: Could he try out for the part?

“I was keen to do it, but I hadnât done much voice work. I didnât want to be the one to butcher it,” says Redmayne, a major fan of Aardman’s stop-motion work on gems such as Wallace & Gromit shorts. “Iâve heard of people doing voiceovers and getting fired a couple days in. I thought Iâd save everyone the embarrassment and get fired before getting hired.”

Turns out Redmayne makes a top caveman. Here’s how:

He brought the giddy teen-cave enthusiasm

Park agreed to try out Redmayne as requested. But the director says he knew he had already found his Dug, describing the caveman as a “born optimist, full of enthusiasm,” who challenges Bronze Age intruders to a pivotal soccer game to save his tribe.

They talked about how the teenage Dug believes, despite strong evidence, that his tribe was capable of great things.

“And Eddie suddenly went into this teenager voice,” says Park. “I knew immediately, this was good.”

There is an Eddie/Dug resemblance

Park and his Aardman team had already sculpted Dug from clay before casting Redmayne. There were 18 Dug dolls made by the team of 23 model makers shooting the stop-motion film. But Redmayne sees a likeness.

“I definitely have a massive mouth and huge teeth,” he says.

The actor also bulged his eyes open Dug-style while recording to match his eager character.

“I did the whole thing with wide eyes to try and project Dug’s enthusiasm. So hopefully I fitted into Dug more than Dug fit into me,” says Redmayne.

He worked up a sweat in recording

Redmayne noticed on Day 1 that the recording studio men’s room had “about 40 different types of deodorants lined up by the sink. I thought that was overkill.”

But he quickly learned they were essential. Park admired how “worked-up” Redmayne would get performing, physically acting out his ebullient caveman around the studio.

“It’s a sweaty business,” he says. “And Dug is the most enthusiastic human being that has ever existed, so it’s weirdly tiring. Eventually, several types of deodorants were used.”

He went full-caveman with Maisie Williams

Redmayne and Game of Thrones star Maisie Williams, who plays the sympathetic Bronze Ager Goona, ventured to Bristol, England, to visit the Aardman studios and record some dialogue. They were gifted with matching prehistoric attire.

“Maisie Williams and I did get dressed in stupid wigs and caveman outfits,” says Redmayne. “That was our hardcore research. I fear there is slightly humiliating video of that somewhere.”

Redmayne further excelled at grunting, which he enjoyed.

“Weâd have whole-hour sessions of making grunts and noises,” says Redmayne. “My favorite moments were making these absurd sounds and seeing how they used them.”